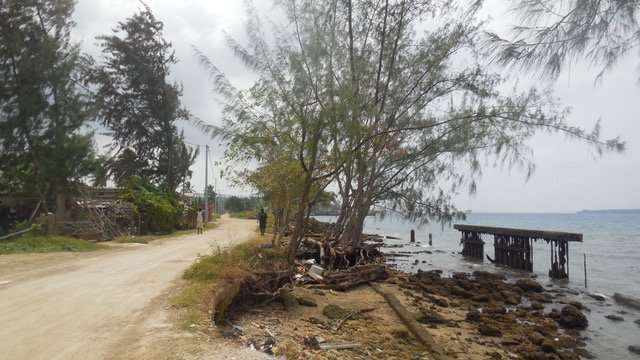 Vanuatu: the challenging path to achieve redress for loss and damage

Eighty-three islands with a combined population of 288, 000 are facing an existential threat. But in the face of increasing loss and damage spurred by cyclones, storm surges, landslides, flooding and droughts, the people of Vanuatu are resilient. They hope that those responsible for climate change will be held to account for the permanent state of emergency into which Vanuatu minister of foreign affair and trade, Ralph Regenvanu, says climate change has thrown the islands

For three decades, Vanuatu has joined other developing states in efforts to try to get the international community to reverse this equation. The results have been incremental, the most recent reflected in the Warsaw International Mechanism (WIM) on Loss and Damage established in 2013.

The promise of enhancing “action and support” for loss and damage was included in the Paris Agreement, which also provided a permanent legal basis for the WIM. But the staged expressions that told of ‘a job well done’ in Paris were also a façade over important unanswered questions, such as who should shoulder primary responsibility for loss and damage from climate change? How can victims such as those in Vanuatu be adequately and fairly compensated for their sufferings from a problem for which they are not responsible? How to determine when losses and damages are attributable to climate change?

Four years on, most developed states deliberately refuse to address loss and damage from climate change at all. At the climate talks that took place over the past two weeks in Bonn, Germany, several developed countries blocked the adoption of ambitious terms of reference for the review of the WIM at COP25 in December. The narrower terms of reference that were adopted make it less likely that the WIM will become capable of supporting concrete actions to avert, minimise and address loss and damage on the ground.

A legally enforceable multilateral agreement based on the polluter pays principle would be the ideal way of resolving the outstanding questions on responsibility for loss and damage. But the politics of climate negotiations show that is merely a distant reality. So, Minister Regenvanu has made clear Vanuatu is considering taking governments and fossil fuel companies to court. In our paper we argue that, despite the myriad challenges in pursuing legal redress, the battle may be worth fighting.

Starting with the most authoritative and prestigious court, Vanuatu could file a contentious case before the International Court of Justice (ICJ) against one or several historical emitters. To claim reparations for loss and damage the islands would need to show, amongst other things, that these are attributable to climate change rather than natural causes. Vanuatu could also campaign for a UN General Assembly resolution requesting the ICJ to issue a non-legally binding advisory opinion on climate change loss and damage, which will clarify states’ rights and obligations. Other options under public international law include action under the law of the sea, human rights law, trade law or the UN Framework Convention on Climate Change.

Lawsuits against fossil fuel companies could be premised on domestic tort law. As emerging caselaw from around the world suggests, evidence of links between burning fossil fuels and climate loss and damage can be relied upon in such suits. The burden of proof will rest on Vanuatu to show that oil companies exploit, produce and sell oil, and by so doing contribute to climate change which in turn causes loss and damage in Vanuatu.

Novel cases employing these approaches will also contribute to framing societal narratives that could in turn change legal systems. They will raise pertinent questions, noted above, in the public domain and raise the bar on legal reasoning. Also, it may take a single successful litigation, for example, against oil companies, to stop the revolving door on multilateral talks on loss and damage. This is because governments and companies know that courts have the power to reward the aggrieved fulsomely. But Vanuatu and similarly affected states must first tread the untrodden difficult, though not impossible, path to climate justice.