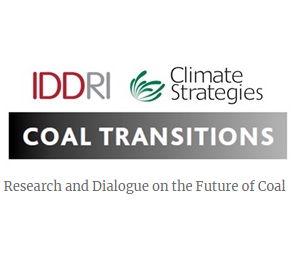 Policy Memo: Energy Transitions and the Future of Thermal Coal.

Between 2016 and 2019, Climate Strategies, together with IDDRI, developed ‘Coal Transitions: Research and Dialogue on the Future of Coal‘.

The project aimed to fill the gap of international dialogue and lesson learning on coal transition, but will also to link to other initiatives focusing on coal, such as on the investor side.

For more information, please download a two page briefing on this page. You can also follow updates on the Coal Transitions website and Twitter page, currently run by the CoalExit team based at TU-Berlin.

Reports produced by Coal Transitions between 2017 and 2018: