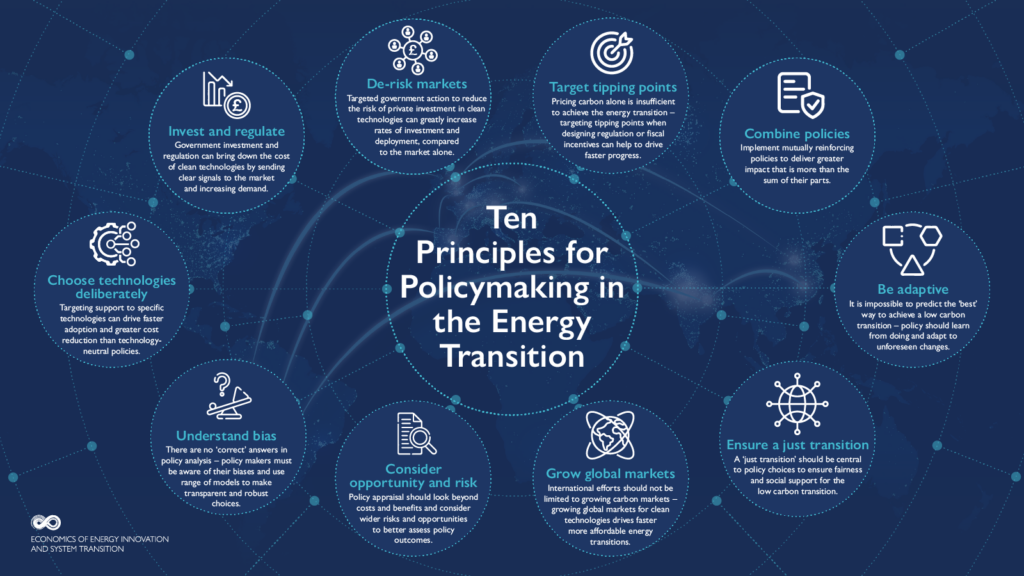 Governments must invest and regulate to bring down energy costs, finds pioneering report

The report, based on a comprehensive analysis of the last three decades of global energy policy, shows that to replicate the outstanding successes of the energy transition so far, such as offshore wind and solar PV, governments must go beyond just providing a ‘level playing field’ where technologies are left to compete against each other. In fact, they should proactively use the three levers of policy: investment, tax and regulation, to accelerate innovation and cost reduction in clean technologies. The report recommends that governments should also target ‘tipping points’, where clean technologies gain an advantage over fossil fuels, leading to a rapid reallocation of investment.

This contrasts with traditional economic advice, on which policy is often based, which assumes the economy will not change very much. Contrary to some of the advice given to governments over the past 30 years, government policy, investment and regulation can cut energy costs instead of increasing them, crowd in private investment instead of crowding it out, and accelerate innovation and growth. In opposition to the idea that policy should be ‘technology neutral’, the successes of onshore wind, offshore wind, solar PV and electric vehicles were driven by governments directly identifying and supporting the technologies that they needed to succeed.

Ten Principles for Policymaking in the Energy Transition: Lessons from experience, provides clear evidence of how and where policy has stimulated rapid innovation and growth in clean energy technologies since the 1990s. Based on this body of evidence, the report calls for governments to urgently reshape their policy approaches to accelerate innovation, job-creation, and cost reduction in the transition from fossil fuels to clean energy.

The findings are consistent with a report by the International Energy Agency, International Renewable Energy Agency and the UNFCCC Climate Champions that the world could make much faster progress towards global climate goals by coordinating practical action in each of the emitting sectors of the economy, focused on crossing tipping points where clean technologies become the most affordable, accessible and attractive options.

Laura Diaz Anadon, Professor of Climate Change Policy and Director of the Centre for Environment, Energy and Natural Resource Governance at the University of Cambridge, one of the lead authors of the report, said: “Experience with clean energy policy around the world over the past 30 years shows that it is time to reconsider what is required to meet climate and energy goals. Decisive government action is essential, but to succeed it must rely on a different set of policy principles, given the transformational scale of change required.

“Governments cannot simply set the goal and encourage the market to deliver. They must be active participants; investing to de-risk markets, regulating to bring down costs, and making strategic technology choices to incentivise and focus the private sector. Doing so can deliver a transition to clean energy that is faster, cheaper and more sustainable for all.”

Investment into clean energy sectors, including power generation, electricity grids, road transport, steelmaking and hydrogen, could support 65 million jobs and $26 trillion of benefits by 2030.[i] With many countries adopting policy measures to address the energy price and climate crises, the report shows how government interventions can create technology tipping points, which in turn unlock competitiveness, investment and the lowest cost decarbonisation – achieving a faster energy transition and lowering bills for consumers.

Nigel Topping, UN High Level Climate Action Champion, COP26, said: “The Race to Zero is not being run in a predictable, linear economy. Instead, the economic landscape is constantly changing, as new technologies and business models emerge and so we need a dynamic, adaptive approach to policy-making. These new principles can help us navigate this inevitable but disruptive transition successfully, to reach our goals of a more prosperous society within a safe and stable climate.”

The report is from the Economics of Energy Innovation and System Transition (EEIST) project, a partnership between world-leading research institutions in the UK, EU, Brazil, China, and India. It details how targeted support for key technologies, such as wind and solar, energy storage and LED lighting, which the economic analysis at the time did not recommend, radically accelerated innovation, cost reductions and economic growth, far beyond technology-neutral policies.

–      Solar PV was initially criticised by economists due to its high cost per unit of energy. However, as Germany, China and other countries applied subsidies and other policies to incentivise deployment, the costs fell by a factor of 10,000, helping solar PV to become the world’s cheapest source of electricity in history.[ii]

–     Offshore wind was originally viewed as risky and expensive. Yet, from 2009, the UK provided stable and generous subsidies to mature the technology and restructured the electricity market to favour wind power. As a result, in the last offshore wind auction, in early 2022, new offshore wind was contracted at just £37/MWh – more than 75% lower than the wholesale market price at the time the contracts were awarded. [iii]

The United States’ $369 billion Inflation Reduction Act has been called ‘the most significant climate action legislation in US history’, due to its far-reaching policy scope, from clean energy and electric vehicle tax credits to large-scale investments in domestic manufacturing of clean technologies, and environmental justice.

Crucially, the Act signals a break with the traditional assumption that carbon pricing is the best way to drive decarbonisation.[iv] Instead, the Act is a clear and deliberate government intervention to bring down the cost of clean technologies, by creating a ‘demand pull’ from combined fiscal incentives and regulations. The report from the EEIST consortium suggests that rather than being a ‘second best‘ option, as has often been supposed, such targeted investment may be highly effective, able to drive innovation and cost reduction as well as cutting emissions.

Simon Sharpe, Director of Economics for the UNFCCC Climate Champions, said: “All countries want affordable energy, and to generate jobs and innovation as they go through the low carbon transition. Traditional economic principles that assume nothing much changes in the economy are not suitable for this context and end up giving governments the wrong advice.  These new principles for policymaking in the energy transition can help governments get it right more often, with better results for their industries and societies.”

EEIST is a three-year project using new economic approaches to support better decision making on policy relevant to low carbon transitions in the fast-growing emerging economies of China, India and Brazil, as well as the UK and Europe.  It is funded by the UK Government and the Children’s Investment Fund Foundation.New approaches to policymaking are seen as essential to achieve the goals of the Breakthrough Agenda, the international plan supported by 45 countries to target tipping points in key clean energy technologies by 2030.